Integrated management schedules of root, seed and foliar diseases ( charcoal rot, collar rot, rust, Myrothecium leaf spot, bacterial pustule, yellow mosaic etc.) have been worked out. Strain variation in Sclerotium rolfsii and Xanthomonas axnopodis pv. glycines has been established. Varieties/lines resistant to major diseases have been identified. Trichoderma viride and Pseudomonas fluorescens have been found effective for the management of collar and charcoal rot. A few natural plant products like Lawsonia, Tagetes and Acacia were found promising for the management of Myrothecium leaf spot.

Integrated Pest Management for soybean has been standardized and demonstrated in farmers’ fields. To facilitate scouting and monitoring, management of spray application, and assessment of likely damage, a month wise calendar of insect-incidence has been prepared. Effective chemical insecticides have been identified and recommended. Microbial insecticides, based on Bacillus thuringiensis and Beauveria bassiana, were found effective for the management of defoliators. On the basis of large scale field screening and laboratory screening, sources for insect resistance have been identified and are being used for developing insect-resistant varieties.

The newly developed machine is a combination of blade harrow cum tractor operated rotary mechanism through power take off (PTO). During operation, the weeds are cut by the blade followed by pulverization of the soil. Subsequent slashing of weeds is carried out by the rotary mechanism. The new machine is provided with guards for rotary mechanism, which protects the soybean plants from injury by the machine. These guards facilitate operation of the machine even in advanced growth stage. This weeder has also been provided with a “cross mechanism” for lower links of the tractor so as to check or eliminate lateral movement of the machine. A striking feature of this machine is that the narrow tractor tyres of 8.3x32 specifications have been employed enabling the operation of this machine in the standing crop. This machine is efficient and can accomplish weeding in 4 hectares during each working day of 8 hours. This machine can also be used in case of other crops like cotton with a little modification.

Intercrops seed drill for planting soybean and recommended intercrop viz. pigeon pea (arhar), maize or sorghum in recommended spatial arrangement of 4:2 row ratio. In operation the middle four rows are planted with soybean, whereas the flanked rows, one each on both the sides, are planted with intercrop. The seed drill has provisions to set the differential seed rates of soybean as well as that of intercrop as recommended/desired. Three boxes have been provided to accommodate fertilizer, soybean seed and inter crop seed separately. To facilitate driving and controlling the seed rates of the crops, three independent shafts have been provided. This intercrop seed drill can bring in a new era of sustainable intercropping for soybean farmers. It is also poised to counteract the risk of failure of one of the crops due to the outbreak of diseases and insects-pests, scarcity of water or unfavourable weather conditions.

Conservation till drill for soybean crop

Conservation till drill for planting soybean (5 rows at 45 cm row to row distance) was developed and tested at the centre. It prepares the seedbed and plants the soybeans in one go, thus reducing the extent of tillage and cost of cultivation. The machine is also time and fuel-efficient. The opener for seeding is coupled with duck foot type (width 20 cm) arrangement to work with surface land (about 7-8 cm depth) to facilitate loosening of soil. The machine has also been provided with special mechanism to cover the planted seed rows. This is one go sowing machine for soybean without any other preparatory operation after summer ploughing. The operation of machine simultaneously facilitates weed management also. The post operation condition of the field is akin to the field sown following normal operations. The worked up surface soil functions as soil mulch avoiding moisture loss from the soil.

Soybean has major command area in the vertisols of Malwa Plateau of Madhya Pradesh. The region is experiencing deficit and uneven distribution of rainfall creating water stress of different degree affecting the productivity of the crops. To mitigate the ill effect of above phenomenon and conserve adequate soil moisture to support the crop, a key line seeding machine (Photograph 7) has been developed and farm validated at the centre. The machine developed at the centre facilitates planting of five rows at recommended planting distance and simultaneously opens one row each on either side (fresh depth is about 20 cm which turns out to about 15 cm after settling) for facilitating removal of excess water and/or percolation of water in soil. The machine costs Rs. 12000 approximately.

The attachment provided with rear flap opening screws, which control the rate of spread of manure when hydraulic trolley is run in the field synchronizing it’s lifting. The mechanism draws power through a chain from the wheels of the tractor trolley for crushing and pushing the FYM. Two rotors with flat blades have been provided to crush and push the manure from the trolley. In a day of 8 hours, the machine can spread the manure in 4-5 hectare. This machine shall save manure labour and time for the operation. 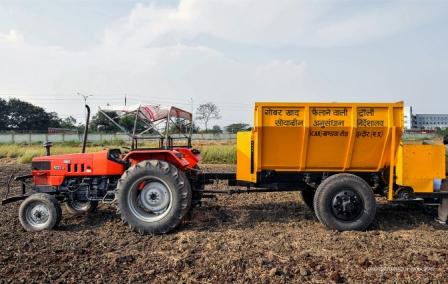 A tractor drawn ridge and furrow maker coupled with sowing mechanism for soybean crop for vertisols was developed. The system consists of an array of alternating ridges and furrows. The ridges are about 20cm high and 75 cm apart.This tractor drawn equipment can form two full and two half ridges on which simultaneously six rows of soybean can be sown. For successful use of this equipment deep tillage followed by heavy planking before the onset of monsoon is crucial for the formation of effective ridges. Higher frame clearance was provided to avoid clogging of ridgers and frame.The machine is so developed herein sowing is carried after complete formation of raised bed simultaneously. 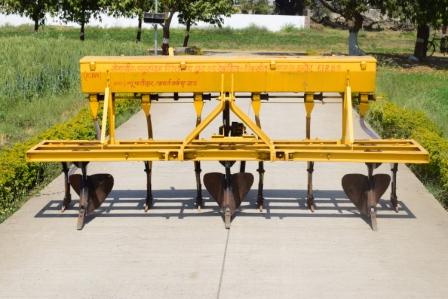 In-siturainwater conservation can be carried out either through land configuration or adoption of suitable tillage practices or through mulching. To validate the equipment field experiments were conducted during Kharif of 2002 and 2003 on Sarol series(montmorollinitic, iso hyperthermic, typic chromusterts) and compared with commonly followed practice (flat bed). The results of the study revealed furrow irrigated raised bed sowing machine forin-situ rainwater management provided an 32% yield advantage over flat bed method and can be recommended for increased soybean productivity.

Cross mechanism devised is very useful for checking or elimination of lateral movement of seed drills and other equipments. This mechanism is easy to fit and detach to and from lower links of tractor. This equipment has an edge over the check chains, which are partially effective in straight row operations. Using this simple device, the straight row planting and further operations using tractors are facilitated. The crop loss during weeding through interculture in standing crop using check chains could be brought down to 3-4%. Local artisans at meager price of Rs 80 could manufacture this simple device easily. It is always better to get this device manufactured for individual tractors for better fitment

Coverage of seed with the help of this device fitted to the tine of the seed drill helps to provide congenial environment to the seed for germination and emergence. This method of putting soil over the dropped seed allows moisture and oxygen to approach the seed under the covered soil. This is one go sowing machine for soybean without any other preparatory operation after summer ploughing.The device is 16 cm wide and 25 cm high. Inverted V notch with base of 10cms pushes the soil over the seeds for proper coverage. Normal planting results in 7-13% uncovered seed, which normally do not aid to plant stand. The device permits total coverage of exposed seeds normally results in normal planting. The device also helps in proper germination of bold seeded variety even if there is shower just after sowing.